Hoppers Cap Off 2019 with League Title 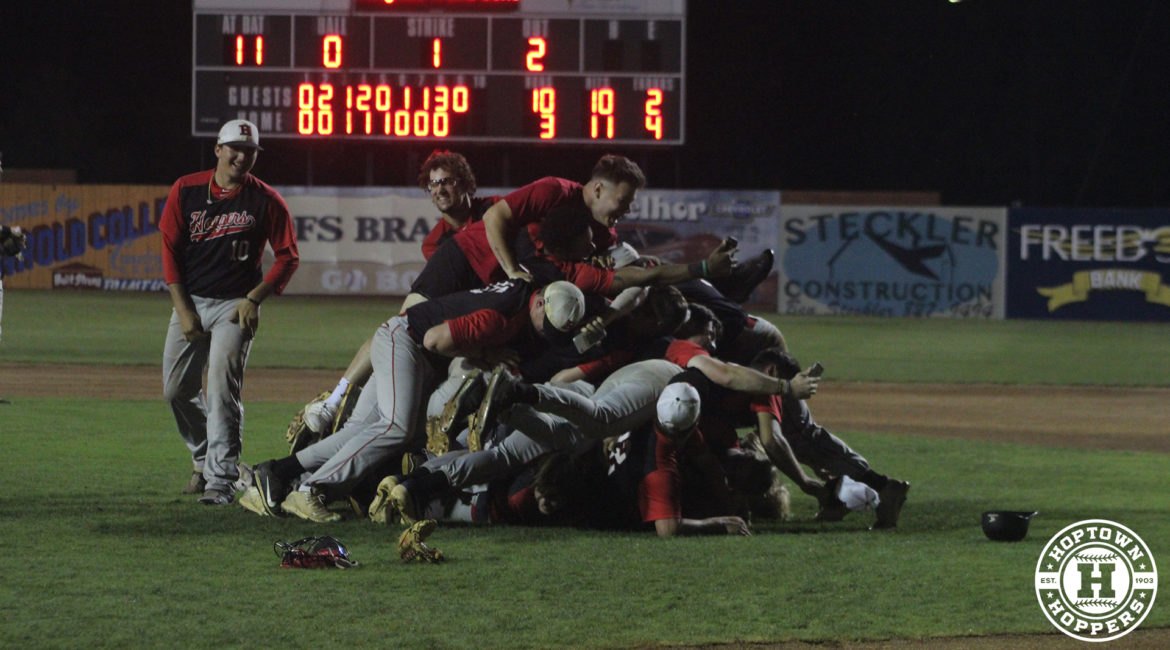 Bottom of the 9th, 0-1 count, 2 outs, and 2 on. Closer Brennan Crooms comes set, winds, and delivers. The Bomber batter hits a high, chopping ground ball to shortstop Micah Genter. Genter gathers the ball and tosses it to his middle-infield mate Drew McGowan. Three outs. Game over. Crooms launches his glove into the Indiana night sky, and is then tackled by relief pitcher Tyler Walton. They are the foundation of what would become a 18-man dog pile. Seth “Bull” Bennett would be the first Hopper to hop on the pile, and Charlie Fischer, nursing a hamstring injury, would be the last. After a trophy presentation, many photos, a long bus ride, and a police and fire escort home later, the summer baseball season ended for those 18 young men and the Hoptown Hoppers organization.

Saturday night culminated a season that began with 22 unfamiliar faces descending onto Hopkinsville, Kentucky with just over 2 months of wood bat baseball ahead of them. The journey was full of journeys, ups, and downs. The squad faced losing streaks, winning streaks, coaching changes, injuries, slumps, weather interruptions, AC-less bus rides, teammate departures, roster additions, and more. Despite these obstacles, this group of ballplayers turned their summer into something unforgettable.

After defeating Madisonville on Opening Night in front of a sold-out Hoptown crowd, the Hoppers hit a 3-game skid. Losing by a combined run total of 42-18, the outlook of the summer was not very bright. A silver lining was visible, however, because despite the run differential, the Hoppers were hitting in stride with their opponents. The team knew they could turn things around and get back on the winning side.

Back on Track, and Never Looking Back

The Hoppers would turn the 3-game losing skid into 7-game victorious streak, a stretch of games that the boys in red would win 9 out of 10 contests. This streak earned the lead in the west division, a title the team would not lose grasp of for the rest of the season. The Hoppers had found their groove, and were beginning to see themselves as serious contenders in the Ohio Valley League.

A Change at the Helm

Around the midpoint of the season, Hoppers head coach Grayson Crawford was offered and accepted a coaching position at nearby Austin Peay State University, and, mutually with the Board of Directors, surrendered his position of leading the Hoppers. The Hoppers would hand over the coaching duties to the two young assistant coaches, Nick Walker and Matt Reed. Walker and Reed would share the head coaching title, taking over a squad destined for something special. They knew, and the players believed, that great things were coming for this squad.

In place of an all-star game, the OVL formed its first All-League, sponsored by Jones Brothers Towing & Trucking. The league was voted on by all 9 head coaches, and the 10th and final vote was conducted via a fan vote. With many deserving members, the Hoppers held five finalists for the recognition: Cam Barlow, Charlie Fischer, Ben Huber, Jacob Jenkins, and Chandler Kendall. When all was said and done, Cam Barlow and Jacob Jenkins made the final cut for the team, selected as starting pitcher and outfielder, respectively.

With a win over the Henderson Flash on July 19th, the Hoppers claimed the OVL West Division Regular Season Title. Since the OVL didn’t split into division until the 2017 season, the Hoppers’ back-to-back-to-back divison championships give them the distinction of being the only team to garner such a titles.

The work was not yet done, as the Hopper squad had their eyes set on a bigger title. In a three-way race with the Henderson Flash and Owensboro RiverDawgs of the East division, the claim to the overall best record in the league came down to the wire. In the end, the Hoppers would go on to claim the distinction and lock up pivotal home-field advantage throughout the OVL playoffs.

Postseason play would begin with a first round matchup with the Miners from Madisonville. The Hoppers would take the series easily, cruising to wins with scores of 13-7 and 17-4. The Hoppers would go on to face the Paducah Chiefs in the second round of playoff action, sweeping them as well with 10-4 and 5-3 victories. The Hoppers had punched their ticket to the Championship Series, and would face the hot Dubois County Bombers for the trophy. After wooing the home crowd with a comeback victory in the series’s first game, the Hoppers headed to Huntigburg with eyes set on a championship. The Hoppers would cruise to a 10-3 victory, sweeping their way through the playoffs, and cementing their place in Hopper history.

The Hoppers thank everyone who made this summer possible, from the Board of Directors, to the host families,the field crew, our incredible fans, etc. Without the efforts of the whole community, none of this would be possible. This was for you. See you in 2020. #LetsGoHoppers