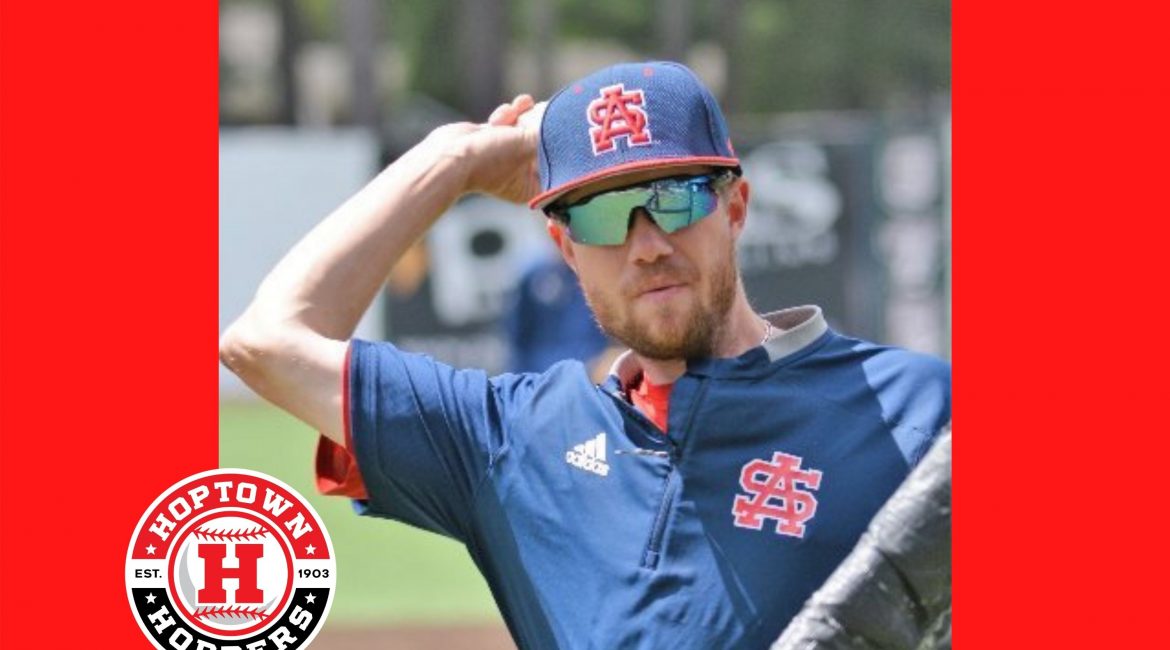 Collegiate assistant Coach Brett Lindsey was introduced on October 3, 2020 as Hoptown’s 9th Head Coach in the franchise’s 10-year Ohio Valley League history. Lindsey succeeds longtime veteran collegiate coach Gary Vaught, who was tabbed for the 2020 season but never took the field in a Hoptown uniform since the 2020 campaign was canceled due to COVID.

Lindsey was selected last fall from an impressive pool of 26 applicants.  The 27-year-old skipper joined the Indiana University-Southeast coaching staff prior to 2021 and helped guide #18-ranked IUSE to a stellar 45-14 record, the River State Conference championship, and a spot in the NAIA World Series. IUSE ousted the nation’s top-ranked TN Wesleyan club along the way to their 2021 CWS appearance.

“I’m super excited to be here,” Lindsey said. “It’s a great community, it’s a great feeling to be here and I can’t wait for 2021. Our team will definitely be an aggressive, resilient attack offensively,” coach added. “Defensively, we’re going to be sound. I’m originally a shortstop when I used to play before I hung it up. I’m a big believer in defense wins championships so minimizing errors the best that we can is what we’re going to do.

“I believe we put together a team with the talent to win another OVL championship,” Lindsey said this spring.

Lindsey previously coached at Broward College in Fort Lauderdale, Florida. At Broward College, Lindsey was responsible for Hitting, Infield, and Recruiting. Unfortunately, the season was cut short due to COVID. Prior to the season being cancelled, Broward College finished the season in first place in their conference. Before Broward, Lindsey coached in the Northwoods League with the Bismarck Larks in the summer of 2018 and 2019. As the Associate Head Coach, he again was in charge of Hitting and Infield. In 2018, the offense helped lead the Larks to their first ever playoff appearance. Lindsey also got the honor of being the Hitting Coach in the 2018 Northwoods All-Star game. In 2019, the Larks offense lead the prestigious 22 team league in Runs, RBI, and Stolen Bases. Additionally, the offense ranked second in Walks and On Base Percentage. In the two summers, Lindsey assisted in the development of nine Northwoods All-Stars and three infielders to the Northwoods Gold Glove Award.

In 2019, Lindsey was a Graduate Assistant at the University of South Alabama where he was getting a Masters degree in Sports Management. The year prior, Lindsey was a Graduate Assistant at Alabama A&M University where he received his Masters of Business Administration with a concentration in Logistics and Supply Chain Management.

GM Ted Jatczak and Board President Frank Giles announced the hiring of Gary Vaught as the next head coach of the back-to-back-to-back OVL West Division Champion Hoptown Hoppers. Vaught makes his way to Hoptown after retiring from a 34-year head coaching career at the conclusion of the 2018 season. Vaught’s successful coaching career saw him amass a 1280-723-2 (.639) record with head coaching stops at Connors State College, Kansas State, Oral Roberts, and the University of Indianapolis. Vaught’s longest stay was with the Greyhounds in Indianapolis, where he held an impressive 808-533-2 (.603) record in 24 years at the helm of the program.